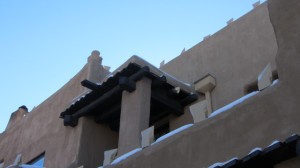 Christmas Eve Day dawned cold and crisp, and although our thin Phoenix blood had not yet adjusted to the 18-degree weather, we were enjoying the Christmas-y feeling so sadly denied us in the “Valley of the Sun” from whence we came.

Before heading out of Albuquerque, we made a stop at the Indian Pueblo Cultural Center — a must if you have any interest in New Mexico’s Native American culture and history.

These Pueblos were settled hundreds of years ago, but the exact details of their history vary depending on whom you ask. Archaeologists claim the Pueblo people are descendants of a Native American culture that has inhabited the area (as well as parts of Arizona and Colorado) for perhaps thousands of years. The Pueblo peoples’ own beliefs about their origins tend to differ from archaeologists’ theories; a phenomenon fairly common throughout the Southwest.

Although this difference in points of view can be a point of contention, I felt it was addressed very well in the Center’s downstairs museum, where you can find artifacts and a timeline ranging from prehistoric times to the last few decades as well as beautiful examples of each Pueblo’s unique pottery styles and designs. You can find out more about the Cultural Center, the Pueblos and Pueblo etiquette at www.indianpueblo.org.

Unfortunately, no pictures can be taken inside the Center, and although some of the displays (especially the examples of weaving and textiles) seem to encourage a hands-on experience, I was embarrassed to find out (a little too late) that there is also a strict “don’t touch” policy!

Nonetheless, it was a really special experience to be able to examine that closely the white leggings, white bridal blankets with four “corn” tassels — one at each corner — and kachina kilts I had seen in countless historical pictures; it’s one thing to see a picture but entirely another to actually lay eyes upon the garments themselves. And most items in the Center date from the 1800s and early 1900s.

Before we left, we enjoyed an early lunch at the Center’s Pueblo Harvest Cafe, which offered a variety of delectable Native American and New Mexican selections. I went for the posole; like New Mexico’s ubiquitous green chile stew, posole is a little different each place you order it and sampling the many varieties is sure to scintillate your taste buds.

Side note: with posole, as opposed to green chile stew, there’s less of a chance that it will be too spicy to eat — something that has happened to me with many a bowl of green chile stew, as I try it nearly every place we go…in a phenomenon my husband cites as a real-life demonstration of the often-stated definition of insanity: doing the same thing over and over and expecting different results…