Our yearly New Mexico Christmas road trip started out the way it usually does…among a flurry of texts, emails and phone calls from friends asking if we had heard about the Winter Storm Warning.  This year, along with the usual reports of a storm blowing through, came urgent warnings that portions of the I-40 to Albuquerque were closed.  Of course, as always, right along our planned route.

My immediate thought was that everyone must be mistaken; I had checked the weather report a full 10 days in advance for this very reason, and it had been nothing but sunny skies.  Where this freak storm came from, I don’t know but it seems scientifically impossible that a winter storm would blow in every year exactly the day we plan to do most of our driving.  I had a sick feeling in my stomach; after living in Phoenix for 17 years my confidence in my winter driving skills was right up there with my confidence in successfully landing a 747.  My husband was optomistic however, and convinced me to proceed as if the weather were not a concern. 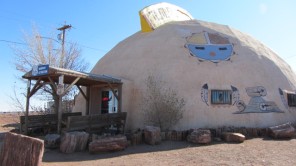 Not a cloud in the sky as we departed the Phoenix area, and aside from some snow around Flagstaff it was clear sailing down I-40 all the way to the Arizona border. We stopped at one of the souvenir shops that dot the I-40 between Flagstaff and Gallup, all remnants of the old Route 66 days (and now mostly ignored by the more pressed-for-time interstate travelers).  Many of them have almost embarrassingly-outdated themes.

This one happened to be shaped like a huge…igloo?  Wikiup?  I am not sure what Native American dwelling they might have been going for, and the hodge-podge of symbols decorating the exterior – standard eagle feathers framed a window directly below a Zuni sun symbol (next to a rendering of petrified wood) – didn’t help the identification process.  On a side note, if this huge structure happens to escape your attention as you whiz by, don’t worry; there’s no way you’ll miss the biggest dreamcatcher you’ve ever laid eyes on, erected right out front! 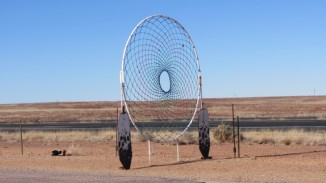 Inside the Meteor City Trading Post were the usual kitschy offerings one expects to find in touristy establishments in this area; Arizona license plate keychains featuring your name, miniature Kachina dolls, geodes and other polished rocks…alongside some very nice genuine Native American handiwork.  But you have to know what’s what.

“No, seven dollars ninety-five cents,” she assured me.

“In India,” she replied somewhat sheepishly.  “But when people ask if it was made by Indians, I can say yes!”

Pretty tricky.  And I’m glad I did ask.  But it was nice, and how can you pass up that price, regardless of origin?  I bought it.

We continued on our way, anticipating any weather-related road trouble would come near Gallup and the border, but nada.  Still clear skies.  It got a little cloudy as we pushed east, but needless to say, the I-40 closures had miraculously opened  just hours before we passed through, and aside from some black-ice laden white-knuckled miles between Grants and Albuquerque we made it in one piece to our first-night’s destination.

Ah…New Mexico.  What is it about that state?  My husband and I have been making this journey at Christmas-time for the past six years.  What had started as a one-time trip to check out the many Pueblo villages in northern New Mexico turned into a yearly sojourn – and the amazing thing is we have still barely scratched the surface as far as things to see and do.  Aside from the Native American and Spanish heritage, New Mexico is known for its amazing natural hot springs, beautiful landscapes and especially its art.

This year, we had only a few days so tried to pack in as much as possible.  That first night in Albuquerque we ate at Sadie’s of New Mexico, known for its delicious New Mexican cuisine.  We had seen this little restaurant on an episode of Man vs. Food a few months back, and were especially looking forward to trying the famous stuffed sopaipillas.   After a few nervous minutes driving through a sketchy-looking area after exiting off the I-40, we found Sadie’s tucked away inauspiciously off the main strip, sign not even fully-lit.  Once we approached, our fears were put to rest – it was packed!

After being ushered almost immediately to an available table in the cozy bar area, we were treated to live jazz music in a softly-lit atmosphere, with a blazing Christmas tree in the corner and a huge fireplace filled with beautiful twinkling candles.  We loved the ambiance, but were blown away by the food.

I had the green chile stew (I try it every place we go in New Mexico – it’s always different), which was served with homemade flour tortillas for sopping up the spicy goodness.  My husband ordered the stuffed sopaipilla, which was about the size of a medium pizza!  Needless to say, we gorged ourselves and returned to our hotel satisfied, if not more than a little sleepy!